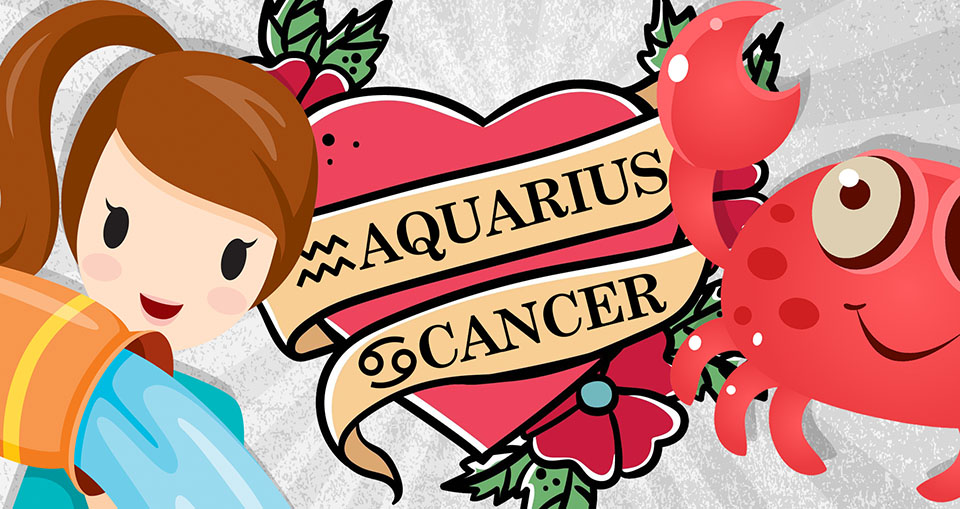 Different strokes – these two – definitely a case of opposites attract when romance occurs. Cancers’ world is cozy and intimate – their universe revolves around immediate family and loved ones. Aquarius belongs to the universe – humanity is their family.

The crab loves being in a relationship – the water-bearer doesn’t want to be owned – they dance to very different drums and will need patience and effort to make love work. Both possess nurturing spirits – whether its saving whales or raising children. It’s this passionate, tender essence that could eventually bind them together.

A friendship with plenty of breaks and individual space! Cancer looks to the past for their values and beliefs whilst Aquarius rockets ships ahead to the future, playing with Parallel universes and Robot implants.

At times, both can get a tad fanatical – Cancer may dabble in fundamentalist religion whilst Aquarius embraces Anarchy and discarding of old conventions – extremism drives a temporary wedge in their friendship – or lands one of them in prison.

When they inevitably come back – moderating their beliefs – the friendship is resumed. These signs admire each other’s intelligence – opinions are researched – sometimes they are swayed a little by thoroughly articulated evidence.

As friends, they spend a lifetime trying to convert each other – giving books and sending links to videos and documentaries to prove their stance. At its core, this is a friendship that thrives on robust arguments – sometimes they even engage in button pushing – just to deliberately raise the level of exasperation.

This is funny to watch because both are crap-ola at flirting – Cancer sits on the leaderboard just ahead of Aquarius. The Crab is shy, cautious and sometimes skeptical of other people’s motives whilst the water bearer is just plain oblivious. It’s going to take a third party to awaken the possibility of romance – let’s call it the “Sleeping Beauty project”.

Somebody needs to plant the seed of attraction and get them into the same space at the same time and to shut all exits – both have bolting tendencies. When attraction is established Cancer takes the lead with sweet sensual flirting whilst intellectual Aquarius interrogates opinions. Give the water bearer a couple of stiff drinks and they might just make it less of a lecture and more of a romantic dance.

The Cancer and Aquarius in relationships…

If their individual “specialness” allows a relationship to flourish it’s always going to be a work in progress. Cancer is a water element sign – deep, emotional and intimate, and Aquarius is an air element sign – restless, impatient and constantly blowing hot and cold.

It’s up to Cancer to unlock and stabilize the water bearer who is terrified of discovering emotions, normally reserved for saving whales. At the same time Aquarius drags Cancer, marginally, into the 21st century and gives them an appreciation of modern art, dance and Degustation dining. 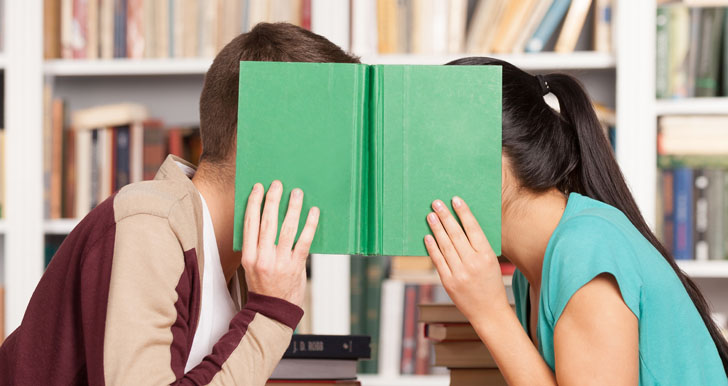 Where they do mesh is around the fact that both are self-contained – they don’t need a huge social network and have hermit-like tendencies. In a relationship Cancer/Aquarius are likely to spend time on retreating – turning the phone off – just pottering about – Cancer bakes up a storm whilst Aquarius reads Sci-fi novels.

Without the clamoring demands of the outside world they are able to strike a sweet harmony. Cancer/Aquarius are probably a couple you won’t see together, a lot, in public – given their differences – Cancer is usually in church whilst Aquarius is busy protesting against immigration laws – the relationship really only happens behind closed doors.

Aquarius can be off-handed and flippant – sometimes they just don’t get that stacking the dishwasher correctly is as important to Cancer as world peace is to them. 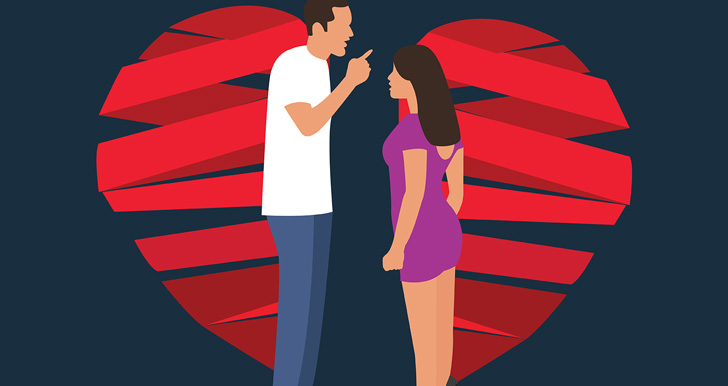 Half the time Aquarius is in the bad books and doesn’t realize – they’re thinking a hundred new thoughts at once whilst Cancer is brooding about last week’s infraction. Both are empathetic creatures so communication and walking a miles in each other’s shoes is critical – a good dose of therapy wouldn’t go astray either!

When Cancer and Aquarius fall in love…

Cancer is a cardinal sign which means they want to initiate and direct the romance. The crab orchestrates dates – usually romantic and intimate – and drives the relationship to the next stage – think meeting parents, being exclusive. These are small potatoes to Aquarius but they enjoy the attention given to their often-neglected personal life. 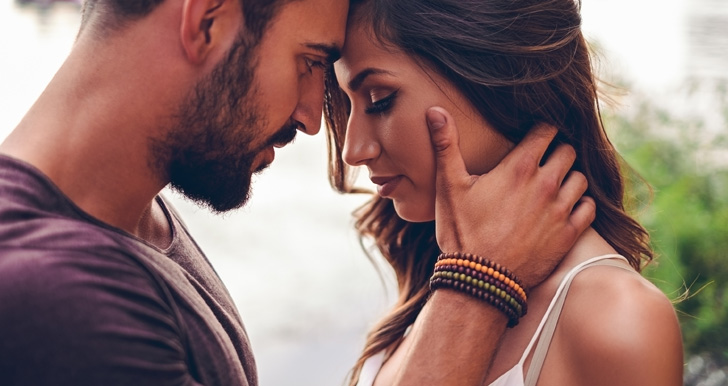 Aquarius is a fixed sign – stubborn and sometimes immovable. They fear losing control and duck and weave to avoid being pinned down. If Cancer is persistent and not too heavy-handed, Aquarius gradually comes to realize they can have both romance and freedom. When the water bearer starts shouting their love from the rooftops you’ll know it’s a done deal – but until then it’s a game of strategy and careful cultivation.

This could be quite a passionate affair – neither are into casual sex but if Cancer trusts, and Aquarius’ emotions are unlocked then sex is deep and meaningful. It’s also a sacred place where they won’t compete for ideas. 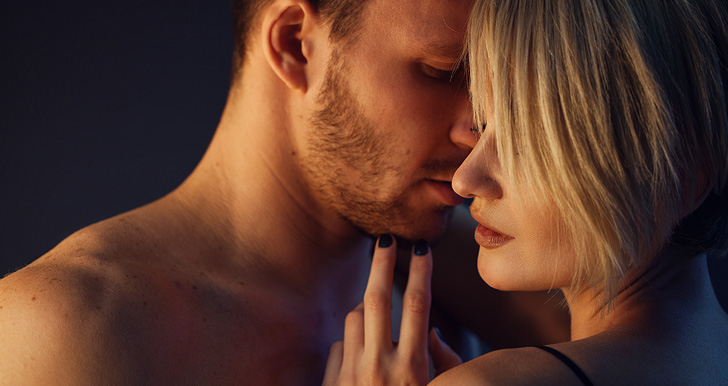 Cancer brings romance and sensory delight – complete with a Barry White soundtrack and Egyptian cotton sheets and Aquarius injects imagination – it’s not unusual for these two to be caught playing Princess Lei and Hans solo behind closed doors.

Tricky and complicated – but not impossible. Respect is the key – and that they are not too extreme for each other. They may never get to marriage if Aquarius is totally morally opposed – where compromise is possible – Cancer might get a wedding in exchange for Aquarius going solo to Antarctica for three months – expect anything from rurally rustic to futuristic fancy dress on the day.

In the best Cancer/Aquarius marriages the water Bearer goes out to change the world and the Crab stays close to home ensuring their world never changes – it works because Aquarius loves coming back to an oasis of peace and calm to recharge and reflect.

Children are possible and both parents feel a strong responsibility to pass on solid values – it’s just that deciding on whose values are paramount will be a parenting challenge and – at times confusing to offspring.

TRUST AND COMMUNICATION:
55
SHARED VALUES:
50
EMOTIONAL CONNECTION:
55
SEXUAL CHEMISTRY:
65
MARRIAGE COMPATIBILITY:
50
The Good:
They like each other’s minds.
A surprise in the bedroom.
Both like alone time.
The Bad:
Aquarius doesn’t want to be tied down.
Cancer thinks Aquarius has a screw loose.
Aquarius thinks Cancer too negative.
55
Compatibility Score