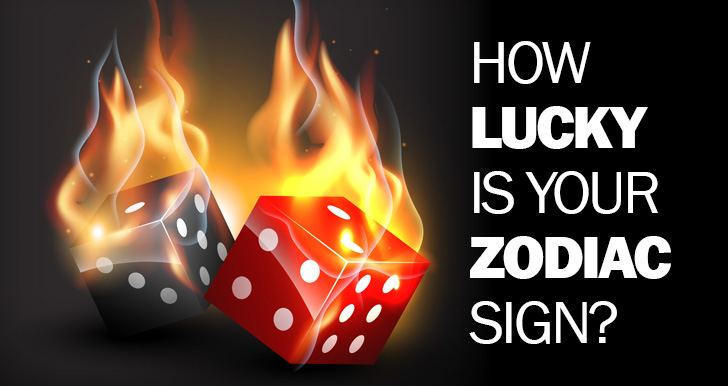 Some zodiac signs seem to attract good fortune wherever they go whilst others feel like they are always drawing the short straw in everything that they do. To find out whether you’re more likely to win the lotto or be the victim of a bad series of events lets take a closer look which signs are considered to be the most lucky, shall we?

Aries: their luck can be hit and miss.

Taurus: lucky in some areas… others not so much.

The Taurus personality tends to be extremely lucky in some areas in others not quite so much. When it comes to their career and financial goals they tend to have it going for them but in other areas (such as their love life!) they can sometimes feel like they just can’t catch a break.

Gemini: not exactly the luckiest sign in the zodiac.

Cancer: their luck can change day-by-day.

Cancer’s luck can change dramatically depending on the day of the week. When luck is on their side they can find themselves really on a roll with everything just falling into place perfectly. But when the sh*t hits the fan and luck is not on their side – things can take a serious turn for the worst.

Leo: definitely on the lucky side.

The Leo personality is one of those signs that sometimes seems like luck is always on their side, often leading to envy from other less fortunate signs. They can make things look almost too easy and as if they don’t have to try. It’s just one of the perks of being a Leo.

Virgo: they’ve got the universe on their side.

Virgos tend to do well in life partially because they have a seriously good work ethic. But on top of that they tend to be quite lucky too. Combine these two characteristics and it’s easy to see why they are often wind up being some of the most successful people in all of the zodiac.

For Libra luck just isn’t something that they can always count on. It’s not that they are especially unlucky but they don’t always just fall into good fortunes either. Thankfully, the Libra doesn’t like to rely too much on “luck” to get ahead anyway – instead they make their own luck through hard work and perseverance.

Scorpio: when it comes to luck they’ve got it going on.

When it comes to good luck Scorpios definitely have got an edge. They’ll often find themselves stumbling into good fortunes without even trying much to envy of those around them. They just need to be careful not to take it for granted or else they can find themselves throwing away the many opportunities that the universe bestows upon them.

Sagittarius: sometimes it can feel like everyone else gets all the luck.

Sagittarius isn’t the type to feel sorry for themselves for too long but there’s no denying that their luck can be rather awful at the times. They can find themselves wondering why others around them seem to catch break after break whilst they have to work so much harder to get to the top of the pack.

Capricorn: don’t even talk about it.

Oh poor Capricorn. Sometimes they can work so hard to get ahead only to find things that are totally out of control just setting them back time and time again. They can feel like their bad luck streaks last eternity but they’ve luckily got the work ethic to get back up no matter how many obstacles the universe throws their way.

Aquarius: their luck is all over the place.

Much like their personality the Aquarians luck can be rather unpredictable. Some days they’ll be up with everything going right for them and on other days they’ll encounter so much bad luck that they feel like they just want to give up altogether. But even when things don’t go well for them they have the drive to keep fighting until they make it right.

Pisces: really lucky in some moments… and really unlucky in others.

For Pisces their lucky can be quite extreme whether it’s for the better or worse. Sometimes they’ll stumble upon phenomenally lucky opportunities and find themselves effortlessly attracting everything that they want. Whereas other moments they find themselves so bogged down as the universe throws them so much bad luck that they just want to cry.